President Obama speaking up on #TrayvonMartin

A few years ago, I was leaving my neighborhood park at dusk and I had a “fit the description experience.” I was walking back to my house after playing a few games of pick-up basketball. On that evening something odd happened to me, I was stopped by two Prince George’s County police officers. They asked me where I was coming from, what I was doing, where was I going, my name and my address; they said I fit the description of someone they were looking for. Sadly, in America too often black men coincidentally always end up “fitting the description,” just because our complexions are black and brown. 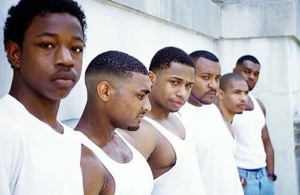 I’m reminded of this event in my life, because of the recent murder of the 17 year-old #TrayvonMartin in Sanford, FL on the night of the NBA All-Star game. No I wasn’t stopped by a over zealous watch captain and, obviously, nor was I shot and killed, but like him that night, in the eyes of a white man with a gun and a notion of power, I too “fit the description.” Black and Brown men all over this country have been fighting this perceptive “description” for way too long; we’ve fit it driving while black, shopping in retail stores, going through airport security, patronizing a nightclub, as athletes, as entertainers, and fatally while walking in our own neighborhoods. Like you, I wonder what the “description” entails?

So now, as a result of #TrayvonMartin’s death, pastors, politicians, celebrities, pundits, radio personalities, and just about everyone who has heard about this story and has an ounce of compassion, are speaking out for justice to be served and the arrest of murder George Zimmerman. With the use of mass media and social media outlets the story of #TrayvonMartin is being brought to the forefront of our timelines to spread awareness on the negligence of the Sanford Police department and their handling of this murder case. It is my hope and belief that, with the national media attention that this #TrayvonMartin travesty is receiving, justice will be served!

Now with that being said, let me also encourage all of us to continue with the same passion and fervor for justice and accountability when black on black murder occurs as well. Too often, as a black community we find ourselves up in arms when a person of color is wronged by an individual of another hue; resulting in marches and protest that garner strong results. Just imagine the kind of impact that can be had if we used these same methods of protest and advocacy in our own communities to stimy the drug dealing, domestic violence, crime, and murder that pervades in our own communities. I sincerely believe that these same efforts being used to bring justice for #TrayvonMartin can be used to #LIFT our communities.

It Takes A Village,

Recently I met with my boss, the CEO of a very large company that I’m apart of, and I expressed to him my desire to organize and start my own “start-up.” Graciously, he allowed me to share with him my passion to help people and communities, my vision to do this, and where I want to do this. I gave him what I believed to be the pros and cons of a “start-up” and for remaining apart of an established corporate organization. After hearing me out, my CEO began to talk to me about what he viewed as the cons of a “start-up” and the overwhelming pros of remaining in a corporate organization as he sees it.

His reason for staying corporate are:

1. Why start something new, when we’re already established.

2. You can do the same thing in a corporate situation that you can do in a “start-up.”

3. If you pay your “dues” YOU can be a corporate partner in about 10 years.

Now, I have to admit all of these reasons for remaining corporate are very enticing and intriguing, both financially and for job security, but I too have a dream…

It Takes a Village,

Error: Twitter did not respond. Please wait a few minutes and refresh this page.

Error: Twitter did not respond. Please wait a few minutes and refresh this page.